Straight Talk on Blessings and Curses

Laying The Foundation For A Life Of Blessings 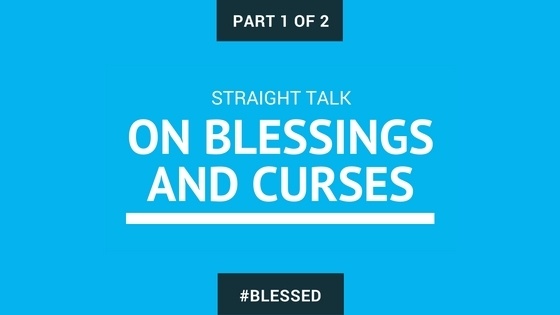 Today I’m only going to lay some foundations on the subject of generational curses, because I want to tear up some wrong mindset thinking and help you understand how you can ensure that as the Psalmist says “surely goodness and mercy shall follow you all the days of your life.”

I was actually reading a book I’d already read on the subject of blessings and curses and I was following some instructions and confessing my own sins as well as those of my ancestors, and I suddenly stopped and said “Trish, what are you doing?”

In that moment, my thoughts went back to what Paul said in the book of Galatians …

O Foolish Galatians!  Who has bewitched you that you should not obey the truth, before whose eyes Jesus Christ was clearly portrayed among you as crucified?  This only I want to learn from you: Did you receive the Spirit by the works of the law, or by the hearing of faith? Are you so foolish?  Having begun in the Spirit, are you now being made perfect by the flesh? Have you suffered so many things in vain – if indeed it was in vain.  ~ Galatians 3: 1-4 NKJV

For as many as are of the works of the law are under the curse; for it is written “Cursed is everyone who does not continue in all things which are written in the book of the law to do them.”
But that no one man is justified by the law in the sight of God is evident, for “the just shall live by faith.”  Yet the law is not of faith, but “the man who does them, shall live by them.”  Christ has redeemed us from the curse of the law, having become a curse for us (for it is written, “Cursed is everyone who hangs on a tree.”), that the blessing of Abraham might come upon the Gentiles in Christ Jesus that we might receive the promise of the Spirit through faith.  ~ Galatians 3: 10-14 NKJV

I’ve deliberately made some of the text bold, to emphasise the difference between those who live under the curse – by trying to live by the law – and those – the just – who live by faith.

Now, I’m not saying I reeled that scripture off in its entirety, but my mind was analyzing the concept of what Paul was saying here.

The problem I had with what I was doing was for me it felt like a ritual… asking God to forgive the sins of my dead ancestors… whatever next!! I certainly don’t know all of them and the only thing I had to go by was results!  What do I mean by results?

We live in a world of cause and effect and all too often we focus on either one or the other – depending upon who you listen to. But on the occasion that I was praying for my dead ancestor’s sins, I was focusing on the effects – i.e. why certain blessings seemed absent from my life – but I was still no closer to knowing the cause.  And the net effect is… NOTHING CHANGES!

Let me explain before I lose you…

Let’s take a look at the life of Job because so many people want to argue that God gave Job into the hands of Satan, which just isn’t true. God just confirmed what was already happening …

Who put what Job had in Satan’s power? Job did! Because despite God promising him that he would take care of him, Job didn’t think it was enough and thought he could protect what he had, including his children, through works.

Job would rise up early in the morning and offer burnt offerings for all of his children after they’d had one of their feasts together… just in case “that my sons have sinned and cursed God in their hearts.”  This Job did continuously the Bible tells us.

So what has this to do with blessings and curses?

Job was continually worrying about something that he had no idea had happened or would happen and he took his worry a step further by sanctifying his children after their “banquets” and then offering burnt offerings for them.

I’m not sure what the exact percentage is, but it’s apparent that we spend a large proportion of our lives worrying about things that will never happen. However, the truth is, we can think things into being which is exactly what Job did.

We then read in Job 3:25 where Job says “For the thing which I greatly feared is come upon me, and that which I was afraid of is come to me.”

Job saw his destruction before it ever materialised because he spent so much time “thinking” about it that it became real.

So let me ask you a frank question… Do you have a curse on your life or have you spent years worrying about “the thing that has now come upon you?”  In other words,

Do you have to revoke the curse, or renew your mind?

Ponder this thought for a moment.

If “the just shall live by faith,” then I’m going to suggest that as Paul says in 12:2, you can “be transformed” by renewing your mind.

Live by faith … focus on God’s goodness and see good results in your life and business.