How To Increase Your Social Media Following By Pruning Your Accounts

With the plethora of social media channels available to us today, it can be easy to feel the need to sign up for every one of them out of fear of being left behind. 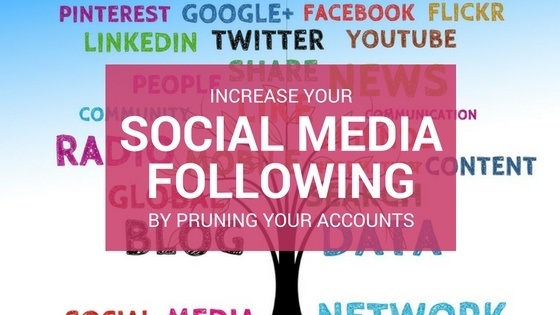 This is how many marketers thought in the early days of social media marketing – some of them creating cheap software that they sold at premium price to newbies afraid of losing out – often to automate and manage the sheer volume of platforms they were on.

It wasn’t unusual to see social networks being promoted as the place to push content and build a following without building relationships … their followers were just an extension of their email subscribers’ list to whom they could sell more of their products and services.

When the abuse of the platform became overbearing, some people saw their accounts deleted or the network would instil stricter rules to edge out the businesses they considered were abusing the platform.

Sadly that meant everyone suffered but fortunately, over time, the social networking channels realised how much they needed the marketers and began encouraging businesses to “ethically” make use of their platform.

However, the abusers of the platform still exists and then there are those pushing on every platform, and yet having impact on none. Ouch, that’s tough!

So what to do?

First of all, you have to understand how to tell your story on the various social media platforms and stop pushing! Gary Vaynerchuk refers to it as …

Respecting The Psychology Of The Platform

The second thing is not to follow the herd and sign up to every social networking channel available to you. If you have, it’s perhaps time to scale it down so you get more by doing less …

Consider The “Less Is More” Principle

When it comes to social media, having less platforms to worry about, enables you to maintain a quality presence and engage more freely and more frequently with your audience.

Conversely, like anything else, when you spread yourself too thin by trying to be “everywhere,” not only are you going to hack people off as you “fly in and fly out,” you’re more likely to abuse the platform … doing more pushing than you are pulling.

Let’s consider the giant, Microsoft. Recently, they took advantage of the “less is more” principle by pruning their social channels by half. The result is that they now reach more customers than they did when they were trying to engage – or not – on more channels.

Whilst you can’t call what Microsoft did a trailblazing business strategy – in fact, it’s so simple that I’m sure most people wouldn’t even call it a strategy – it led to them being able to give more quality to their current and prospective customers.

After all, it is the customers and prospects that matter and by reducing, rather than expanding their reach they improved their overall visibility.

How many social channels are you trying to engage on and how’s it working for you? Tell me in the comments below.

Do These 4 Things to Get Yourself Out of a Rut