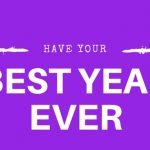 How To Have Your Best Year Ever 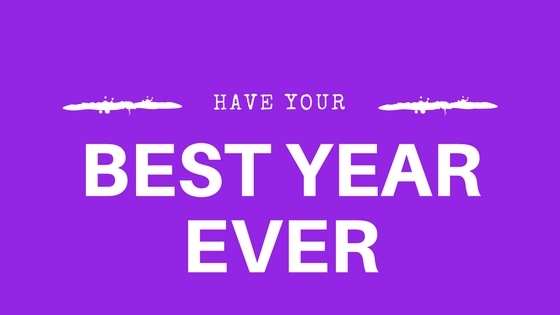 Some of you may recognise the title of my article as being one of the programs created by the late Jim Rohn, entitled “How To Have Your Best Year Ever.”

However, I didn’t write the title just because Jim Rohn created it, I wrote it because I wanted to ask you, how’s your year going so far and share with you my process for having my best year ever.

So, how is your year going so far?

For those of you who made New Year’s Resolutions, how successful have you been with keeping them? Whilst I’m not into making New Years Resolutions, I’d encourage those of you who do, not to abandon all hope for this year and give up at believing it’s a hopeless cause because you’ve struggled to take action on the promises to yourself.

Maybe you failed to exercise today and you promised you would, just do it tomorrow. Cut down the time you exercise to 10 minutes rather than trying to do an hour and failing.

And I wasn’t looking for permission or prophecy from anybody for it to be so.

I knew I was speaking to the right friend anyway and we both just encouraged each other to be fearless in our pursuits. And the only small change we both decided was important for right now, was …

One of the decisions I made in November was just to keep “saying” what I wanted.

I also decided that I might not even feel like “saying” it and I might not even believe what I’m saying at the time, but I’ve learnt over the past couple of years, that our words have creative power.

After all, God created the heaven’s and the earth by “saying” “let there be …”

Yes, you have to come to the place of believing eventually, but in the meantime, just keep saying it!

We had faced a major challenge in the first couple of weeks of December. The deadline date came and went and even in my saying to God, “what happened there?” I felt an assurance that everything was going to be okay.

Two weeks later, I discovered that what I thought was going to happen didn’t happen at all, and on top of that, the situation was resolved in the most unexpected way.

If I’d been a little sceptical before about the power of “just saying it,” all scepticism was dashed that day.

But What About The Corresponding Action, Trish!

I hear you, and no, Trish isn’t just speaking and sitting down expecting things to just happen.

I have learnt that if I can shut up the negative chatter in my mind and allow all that’s good to speak louder, I know “I will have what I say.”

But there are times when you might feel you can’t do anything, other than believe, but that doesn’t mean you just stand still!

If you need a job, keep looking and imagining yourself in that ideal job. If you need that car, go look at some cars and imagine yourself driving it.

If there is nothing tangible to look at, just keep saying what you want. That’s all I could do in my situation, but just hours before the solution came, I KNEW in my heart the situation was resolved. It was whilst I was “saying” what I wanted, that I realised my sight was on the wrong thing. I was still thinking “will God,” when He’d already said, “I have!”

That’s when I switched my focus from asking God to just believing God had already done it. And if you were there, you would have seen the difference. I was literally thanking Him as though it was already done, not thanking Him to try to get it done.

Script It … Imagine It

One of my previous clients taught me how to embody what I want like an actor in a play. When this client first spoke to me about scripting, I was fascinated, but it was when she equated it to an actor taking on the persona of the character they’re playing that the lightbulb illuminated.

You see, I’d heard things like “just have faith,” “believe,” “speak the Word,” but some of us need to know how to do these things. And whilst I could highlight some of the miracles I’ve seen in my life, when I began to put myself in the new picture of what I wanted and acted as though I already had it, getting to what I wanted took far less effort.

I had to believe for a start that God wasn’t withholding anything from me. And He sure wasn’t making me work (as in lament or beg) for it. But I had to embody what I was speaking (my script as my client calls it) as though I already had it.

I had to believe that the promises in the Bible were as much mine as the person or people God was speaking to at that time. And I really had to drop the “God is teaching me something” mentality. Boy, don’t let me preach on that one right now! 🙂

In his book, Secrets of the Millionaire Mind, T Harv Eker challenges us to refrain from complaining, criticising and talking negative for 14 days. He then encourages us to speak only those things we want to manifest in our lives.

What could happen if you did that?

I assure you, the possibilities are endless. It could be the start of your best year ever.

On the 31st of January I sat still shortly before midnight and gave God some serious thanks for the month of January. As my dear friend, Pastor Christine Kumbin, would say, I was “blessed beyond my socks!”

My New Years Eve decision to make 2015 my best year ever was already manifesting and I had no doubt my speaking what I wanted with courage, passion and determination had turned into “pickable” fruit.

Now you say it, imagine it, script it, embody it, until you believe it!