Giving Birth To Your Dreams 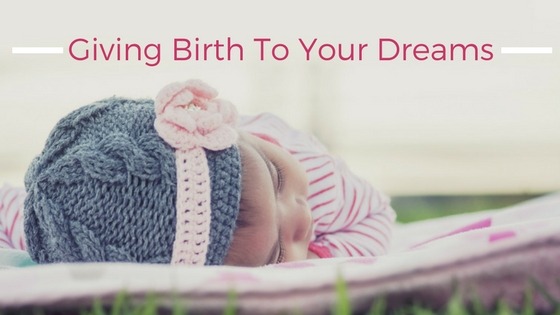 I don’t know why crisis and pain often seem to propel people from despair to declaration, but it often does.

And the interesting thing is that we don’t all have to suffer the same degree of pain when birthing our dreams in order for them to be great.

Like anyone else, I love the rags to riches stories, but don’t buy into the lie that you have to hit rock bottom to produce the best of you.

To illustrate what I mean, I want to share something a little personal with you …

My Own Experience Of Childbirth

For all you ready to faint, I leave out the detail – I’d faint trying to tell you!

I have one child and in the midst of my labour pains, I told the Drs that I wanted a caesarean. Yep, I needed an escape from this pain!

The one doctor who came to speak to me about it, kept prodding and probing me as to “why?”

Seriously, I would have got away with “decking him one” in the name of “I’m pregnant!” He was annoying me that much, and all I’m thinking is, “MAN, what do you know!”

In the end, and too exasperated to be questioned any longer, I just told him,

“I’ve been in pain for three days, haven’t slept, my husband hasn’t slept properly, I’m not even 3 centimetres dilated, the pains are coming on every 3 minutes … so where am I going to get the strength to push when I get to ten centimetres!”

The Dr kinda raised his hands in surrender and said, “okay, okay, you can have a cesarean, but you’ll have to wait a few hours, you’re about 4th in line.”

As he went to walk out of the room, I just prayed, “God, you’d better make it quick because I can’t take this pain.”

I don’t think the Dr’s heels could have left the architrave of the door when I heard the nurse shout, “Chris, hit the buzzer!”

With that, it was like pandemonium! My bed was surrounded with Drs and nurses, the anesthetist being called and suddenly, I was being rushed to theatre to have a caesarean … eventually under general anesthetic.

I remember one nurse muttering under her breath to the other, “he (the anesthetist) needs to hurry up, this baby’s heart rate is going down.”

He was trying to give me a local anesthetic, but it became urgent and hence the reason they had to put me out.

I was partly disappointed since I was adamant I was going to push this baby out, but it was all worth it ….

When I woke up, I feared the worse … I had had a terrible dream just nights before where I was at a funeral. As I was being rushed to theatre, I couldn’t help but think about my cousin, Lynette, who had lost her baby just months after Chris and I were married.

As I was being rushed to theatre, I prayed so hard and so desperately, but I sure know my prayers weren’t even coherent … I was that afraid.

Suddenly my fear was punctuated with the sound of Chris’s voice,

“Patricia, we have a beautiful baby girl.”

I think they could hear my sigh of relief in the recovery room, it was that loud.

Chris and my sister had been taking care of Elodie until I came around and I cannot express the emotions I felt as I first held my baby girl – it was joy, relief, pride and everything in between all at the same time.

Interestingly, she wasn’t even that beautiful, bless her.

Where her head had been engaged in my pelvis for so many days, it was shaped like a cone! As a result, her little chinky eyes were almost touching her forehead, but she was mine and I was in love.

In the night after everyone had left and I came around from the anesthetic a little more, I looked at her and said, “your head is shaped like a cone, you have the most chinkiest eyes, but you’re mine and I love you.”

Interestingly though, my motherly instinct told me that what I was looking at was just temporary. I knew her head would go back to normal, but she had my eyes and so I knew most of that chink was there to stay, but I wanted that.

And what I believed came true … the very next day, she blossomed.

The nurses wanted to take her home and despite crying down the ward and keeping all the mums and babies awake, one mum, Belinda, just kept saying, “but oh, she’s so beautiful!”

I give credit to every woman who has given birth naturally … I honour you … seriously!

Me, I’d already had my backup plan … my midwife had already insisted I should have a caesarean anyway, but I wasn’t having none of it.

But she told me, “if you get to the hospital and you’re not yet 3 centimetres dilated and the pain is too much, insist on a caesarean.” I thought, “tough old me … ain’t gonna need it!”

If anything’s going to bring out the true you, childbirth will do it! I surrender! Not as tough as I thought I was!

Now, I’m not boasting at all when I say this, there were 4 mums on my ward, and I was the only one (to my remembrance) who had had a Caesarean. One lady had twins … BIG kudos to her! Push twice! No thanks!

But … according to the nurses and one of the mums, my baby was the most beautiful!

don’t measure your dreams in accordance with the magnitude of your pain!

I know a lot of people preach this, but I don’t agree with it.

I escaped that pain of “pushing,” even though I didn’t get away with the labour pains.

But one thing that I did even at conception (that’s all the detail you’re going to get), is that I prayed for the health and beauty of my child.

One of the PA’s at my office used to say, “don’t bring that baby in here if it’s an ugly baby.” And I’d tell her, “don’t worry, I will be bringing my baby in because it’s going to be one beautiful baby!”

She looked at me one day with sincerity and said, “Patricia, you really are convinced that your baby is going to be beautiful aren’t you, how are you so confident?”

I made a joke and said, “because the ugliest people produce the best looking babies.” She laughed …

but what I didn’t tell her was that for a good couple of years, I had had dreams about what my baby would look like. And it was beautiful

I admit I thought it was going to be a boy, and Elodie did go through a phase where she looked like a boy – the one I saw in my dreams, but I knew my dream was true and I KNEW it was going to manifest.

Even my dad couldn’t believe how beautiful a baby Elodie was. He affectionately told my mum she looked like a rat, because of her beautiful almond shaped eyes.

What About Your Dreams?

You may have been in pain for weeks, months or even years.

Your pain may only have lasted days and suddenly like me, relief came much sooner than you anticipated. But don’t let that fool you!

The period of your pain is not equal to the magnitude of your dream.

Here are the three things you need to keep focused on:

You’re not a martyr and God doesn’t expect you to birth this dream alone.

I had already been warned by the pediatrician I’d have to be fully monitored during childbirth because of a previous operation on my womb.

The very experienced midwife could see the signs that I should have a caesarean, and I chose to ignore her professional advice … I was being all spiritual … “God intended for childbirth to be natural, and at nine months, not 8 months and 2 weeks!”

If everyone was as foolish as me, there’d be a shortage of midwives!

Midwives are there to help from conception until after the birth.

Who’s your midwife? Who’s helping you give birth to your dreams?

What pain are you in right now that you really don’t need to suffer at all or suffer alone any longer? Ask God for relief. He knows how much pain you can take, but our problem is, we feel it’s righteous to “go through it!”

I ain’t going through nothing I don’t have to … “God, just get me out of here!” Yes, my prayer was raw, but it got God’s immediate attention!

When you’re in that much pain, you don’t have time to be praying “King James” prayers … “oh thee oh thou, mayest thou releaseth me from all that paineth me …”

Talk to God! He knows anyway, so just tell it like you feel it!

It truly is time for you to give birth. The labour pains have lasted long enough and it’s time for the baby in your dreams to manifest.

Help Is On Its Way

I was so tempted to write “Your Help Cometh,” but I thought I’d better behave myself.

However, I’m in the process of releasing two new products that will help you find your voice, give birth to your dreams and maximise your potential.

If you’re interested in getting some help, just leave your name and email address in the form on the side and I’ll notify you once the products have launched.

Until next time, keep the dream alive.