Why Female Entrepreneurs Should Ignore The Media 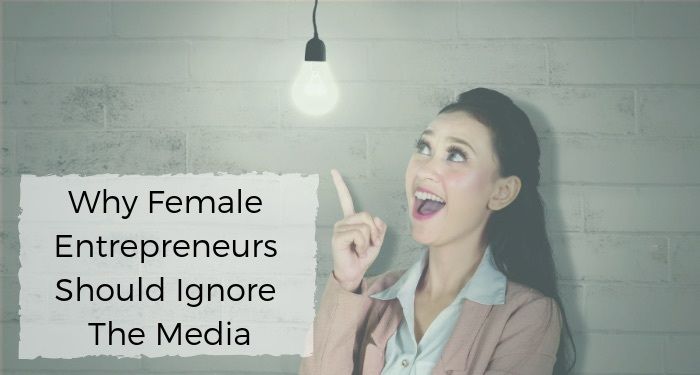 So you’ve decided to take the plunge to building your own business and becoming one of the millions of female entrepreneurs. Congratulations, I implore you!

And The Media Are All Over The Female Entrepreneur Phenomenon

In fact, according to the media reports, there are more women starting businesses today than there are men, and I think there are many reasons for this, one of which can be seen in the rise of mompreneurs …

“women want to have their cake and eat it.”

Yep, we want to be at home to raise our children ourselves and give them some stability, but it doesn’t mean we’re done with making money and contributing to the economy. The home business lifestyle is therefore attractive to many women.

But What’s With The Negative Media Reportings

Now stats are stats right? Well no! Figures on their own are meaningless and though there are so many studies demonstrating the positive rise in female entrepreneurship, practically all of the articles I’ve read, “big up” women for starting their own businesses and then swiftly move on to the “ah but … So many more women give up on their business than men,” or the worse one … “women don’t contribute as much to the economy as men,” or, “there aren’t so many millionaire women as men.” And I could go on.

For a start, who said that all women who start their own business want to become millionaires? Who said that our main focus is money?

And though it may be true that more women give up on their business ventures than men, I’d actually like to see more suggested “fixes” than just mere statements.

For many mompreneurs, their initial goal is to be able to stay at home and raise and inspire their children.

For some, they want to contribute to the family budget and bringing in an extra £50 per month could be the difference between the extra outings with their children, a yearly vacation or even the pet bills. Who knows, and it doesn’t matter.

What can be disturbing for the aspiring female entrepreneur is the thought of feeling that they have to succeed so as not to become another media statistic.

Whilst I agree that there are some facts that ought not to be ignored – such as increasing your chances of success by becoming a part of a community – I think it’s more important that women in business stay focused on their “WHY” and solving the problem they felt compelled to solve in their business in the first place, rather than focusing on the media reports.

No one wants to remain ignorant, but no one also wants to feel a failure before they’ve even started the race.

Though the industrial revolution practically forced women out to work, by God’s design, men tend to see themselves as the providers and women are the nurturers. And this will determine how they each approach business – men being more the go-getters and wanting to empire build, whilst women want to inspire and make a difference in the world. Both are okay.

And Entrepreneurs Are Not Typical

Cambridge University’s new study busted that myth, and suggested it’s actually about time that the views on who makes good entrepreneurs evolve.

The study actually found that female entrepreneurs generate higher profits than their male counterparts, are significantly better organised, extraverted, competitive and emotionally stable than men. Findings that contradict most of the previous studies.

And I’m sure you’ll find this one interesting …

Female entrepreneurs are too modest and tend not to brag about their business prowess.

Ummm. So could that be the real issue … women just need to find their voice and then use it to make a big impact.

I say that if women follow their hearts, the media reports won’t become a stumbling block because no matter how many stats they throw at us, it won’t stick.

Go do your thing, the world is waiting for you!