Being a Virtuous Woman Part 2 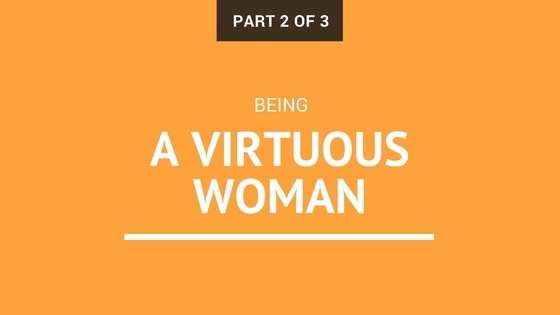 Sorry this post is two days late. When I posted the last one, I forgot it was Friday.

Anyway, back to our topic of the Virtuous Woman… How many of you work for someone else and it’s your job to do everything? I’ll be very impressed if I get any “yes” answers to this except of course if there is very little to the work you do.

Well, some weeks ago the Lord had to remind me that He didn’t intend for me to do everything myself.

Whilst tidying up after dinner, I told God that I was finding it difficult to fit everything in and in my mind, household chores was the very last thing I wanted to be doing. But then I told myself, the Bible says I have to be a keeper of the home and that’s when I heard, “yes keeper.”

It was then that I a) remembered an article I had written on the Proverbs 31 Woman and b) that no one working for a organisation is expected to “do” every task.

I was also reminded how five years ago when both Chris and I were studying for our MBA, I couldn’t think straight because of the chaos in our home and, although I loathe ironing, knowing it was there was a distraction and I’d even rather do that than complete my assignments. And then a friend suggested I get myself a cleaner which I did and not only did she iron, she cleaned the house from top to bottom each week.

It was bliss and it enabled both Chris and I to focus on completing our degree. Unfortunately, I fell into the trap after our daughter was born a year later – you know the DIY modernism – “I’ll do it all myself.” But after my conversation with the Lord in my kitchen, I’ve already outsourced the ironing and I’m now looking for another cleaner and, I feel at ease already!

So the question is, why do us women think we’re super human and that we can do all of the household chores as well as hold down a full time job or run a business or ministry or both?

Let’s Talk About The Proverbs 31 Woman

If you’re reading this and you believe the Proverbs 31 Woman was a “glorified” housewife or homemaker that some people portray her as, then this isn’t for you.

But if you believe that God created you for a purpose, and somewhere in this passage of scripture, God is showing us the evidence, then keep reading.

The dictionary definition of keeper is “one that has the charge or care of something” which is not the same as the one who “does” everything.

A goal keeper in football is there to stop the opposing team from scoring a goal. He’d be crazy to try and score a goal from his goal position but nonetheless, his pass, throw or header in the right direction as well as his skill in goal keeping will make all the difference to the final score.

In the same way, the Proverbs 31 Woman was an excellent “keeper” of her home and it had a positive impact on the whole household. But, she wasn’t required to “do” everything otherwise there would be no reference to her “handmaidens.”

You don’t get the picture of a woman with her hands in dough, flour in her face from her hands, hair “rushed” up in a bun whilst she’s shouting at the kids, flustered as she’s changing the baby and then her husband walks in, sees the chaos and asks “what’s for dinner?”

The picture the Proverbs 31 Woman paints is one of order and peace – everything done according to a plan, with the right people in place to execute the plan. She was the “home” project manager who delegated rather than abdicated her role and for that her husband boasted about her, and her children called her blessed.

I’m not going to go into a long discussion about the sparation of chores, but I see it as my job to “keep” the home and let me tell you, when I discovered the truth about it’s meaning in the Bible, there were a lot less arguments over who does what, there was a lot less stress in both Chris and myself and there was a lot more loving of my role as keeper in the home.

“Keeper in the home” in Titus 2:5 referred to by Paul is where most people get their reference to women being housekeepers as we know it. Paul was however talking about women not being idle gossipers, walking from house to house and neglecting their domestic affairs.

There is however one very important element that I think is missed by most who outline the virtues of the Proverbs 31 Woman but since this post is getting a little long, I will continue tomorrow and promise to also outline the Proverbs 31 Woman’s virtues from a man’s perspective. I’m also going to show you from the Word of God, that she was more than a glorified housekeeper!

Blessings until next time,