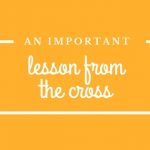 An Important Lesson From The Cross 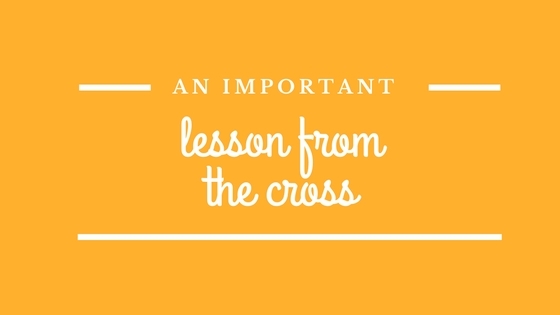 Living On Purpose Is More Than Being A “Copycat”

I don’t know about you, but I’m getting a little fed up with people telling me how to live my life – especially from the pulpit (my Pastor excluded)! Sorry to be so candid, but it’s true!

Hear me out before you hit the back button!

I don’t believe I can live life as I please, because I am unique, chosen for a purpose and only my creator knows what my assigment is. And like yours, sometimes people just can’t see beyond their own calling and can make you feel guilty about the way you go about fulfilling yours.

To illustrate my point, I’m going to share my insight about one of the lessons I learnt from the cross…

John, the youngest of the twelve, was that disciple “whom Jesus loved.” (John 13:23) and even though the other desciples who feared their lives may have been watching the crucifixion of Jesus from afar, John was the only one to stay with Jesus to the very end. In fact, one of the last words Jesus spoke as he hung on the cross was to John:

And in doing this, Jesus fulfilled a Jewish custom in that as the firstborn son, it was his responsibility to make sure his parents were cared for after His death, and John was chosen by Jesus to fulfil this purpose.

Now, as far as Church history tells us, John remained faithful to his assignment and stayed with Mary until she died. He could have abandoned his responsibility and assignment and followed the other apostles – who after the crucifixtion later spread afar to preach the gospel – but John didn’t.

And I’ve no doubt that John did preach while he took care of his “adopted” mother, but just because he didn’t go with the other apostles didn’t make him any less of an apostle than the others.

His role may not have seemed as glamorous but it was important enough for Jesus to make it one of His very last requests. And had John given up on his assignment, he would have been acting outside the Will of God.

I mean let’s face it, which one of the apostles was given the “Revelation” vision of the end times on the Isle of Patmos? Yes it was John the very apostle who had been faithful in what some would have considered a mediocre task in comparison to being an itinerant apostle, preaching the Gospel.

Your job as a child of God is to follow the plan that God designed for you and quit listening to those who are trying to persuade you to follow what everyone else is doing. You were created unique, so why would you want to die a carbon copy of someone else?

This is the reason developing an acute ear to the voice of the Holy Spirit is so important. Then even if people recognise your calling before you do, you’ll always be assured of getting confirmation from the Holy Spirit.

John’s assignment was only for a season and Jesus knew this when He told John to take care of His mother.

So if for example you know you’ve been called of God to preach the Gospel but don’t feel compelled right now to travel the world lugging your children behind you, or leaving them behind, ask God to reveal to you “how” He wants you to fulfill your calling.

There is more than one medium that can be used to spread the Good News, and I’m using just one of them right now!

What’s good for one person isn’t necessarily good for you and if what you’re doing is making you miserable, you definately need to seek God and ask Him to show you His will for your life.

And remember, your assignment may only be for a season, but it’s your faithfulness to God’s plan for YOUR life and fulfilling YOUR given assignment at the appointed time that will shape your character and ensure you receive all that God has for you, as well as ensure you maintain your uniqueness and not end up a carbon copy of ANYBODY else!

I’ve enjoyed receiving your feedback to my blog posts, so keep them coming! I hope you continue to be inspired and encouraged and for those of you who don’t feel so encouraged, still write to me, I want to be able to bless you with words and in my prayers.

Until next time, God Bless,